About VMR Round Hill

The call sign of VN4NL Round Hill was officially granted on the 10th May 1975.

The radio was set up in the General Store at 1770 owned and operated by Jack and Nora Lewis.  The first radio the Squadron had was a Crammond 150 HF.

This was the link to the outside world, as there were no telephones, telegrams were sent via the radio and medical emergencies were handled by the Royal Flying Doctor Service.  The Squadron purchased a RFDS Medical Chest that was kept at the General Store until 1989.

On the 19th May 1988 the Squadron became Incorporated as Round Hill Air Sea Rescue Inc.

As time went by, a 27 meg radio was added, and in the mid 1980’s, VHF radios were installed, which opened up a whole world of communications to the boating public.  Commercial fisherman and charter vessels then came to the area.

This service is provided by a dedicated, small team of radio operators.

Our fist Rescue vessel was a 16-foot Seafarer, leased from a member in 1989. On the 3rd March 1990 the Squadron saw the launching of ‘Round Hill 2’, a 21-foot Seafarer.  This was made possible by the generosity of the late Bill Hammond who with Seafarer owner Lindsay Fry, enabled the Squadron to ‘pay off’ the vessel over time.

In August 1988 a demountable building was purchased at auction to eventually become the squad rooms, and was moved onsite on the 1st June 1991 on land leased from Glenolive Pty Ltd on Captain Cook Drive (near the current Bowls Club). Volunteers worked tirelessly to complete the facility, containing a well equipped kitchen, storage area, training / function room and Radio room, and was officially opened on the 2nd May 1992 by the then President of Air Sea Rescue Queensland, Mr. Matt Patane.

This building was the focal point in our community on every Friday and Saturday night until 1995. The Squadron served home cooked meals and was the meeting place for many. Other organisations and groups such as the RSL and Bowls Club used it (as they had no place to call home).  A local couple started a restaurant which lasted a number of years.

The Doctor’s Surgery was also located on our site until it finally moved to the Community Centre / Day Care area.  Our equipment was loaned to many to assist with their fund raising activities, and the Miriam Vale Shire Council held their Council meetings in our building. Numerous parties and publics meeting were also held.

In July 1994 a boat shed to house our Rescue Vessel was officially opened. We also commenced negotiations with the Miriam Vale Shire Council to obtain land at 1770 for a Communications Centre.

In December 1995 an application was made to the Dept of Natural Resources for a Special Lease on the foreshore at 1770, for a Boatshed and Training facility.

On July 24th 1996 our name was changed to Volunteer Marine Rescue Round Hill, in line with our State Association and for the public to realise that yes we were VOLUNTEERS.

‘Round Hill Rescue’ a 7 metre Noosa Cat was officially Commissioned in June 1997.  The vessel had the token name of ‘The Mavis Row’ after our first Secretary, and some called her the ‘row boat’.

Our Communications Centre at Tupia Street, 1770, finally became a reality and was commissioned by the Mayor of the Miriam Vale Shire Council, Mr. John Bell on the 26th November 1999, in the presence of the full State Council of VMRAQ, members of other Emergency Services, VMR Round Hill and members of the community.

In his address, Mayor Bell congratulated the Squadron on its approach to the project and the service that our small group of Radio Operators provide to the boating public, He said “the service is very professional and well respected up and down the coast”.

In February 2001 we had to vacate our ‘home’ of ten years and planning was stepped up to obtain a Boatshed and training facility on Round Hill Creek. The generosity of 1770 Boat Storage saw the Rescue Vessel and tow vehicle housed securely at no cost to the Squadron.

On the 23rd April 2004, the new Rescue vessel arrived and a team effort was needed to get this ‘baby’ into the water.  This vessel valued at $270,000 was an 8.3M Noosa Cat (almost 10M with pods), with a breadth of 2.8M, capable of holding 1000 litres of fuel and 100 litres of fresh water. This vessel was powered by 2 x 225HP 4 stroke Yamaha motors, with state of the art equipment including Furuno Navnet, which includes GPS/Plotter and 24-mile radar, 2 x VHF marine radios, HF radio, 27 meg and UHF and mobile phone access.

This vessel was officially commissioned by the State President VMRAQ, Mr. John Jacobsen, on the 20th November 2004.  Also that day we were able to announce after 9 years in the planning that the Lease for the Boatshed and training facility had been received.  This was a 25-year lease.

The Jupiter’s Casino Community Benefit Fund had also advised that an application for $45,000.00 towards the building of the ‘boatshed’ had been successful.

February 2005 saw Council approve the boatshed and training facility on the foreshore of Round Hill Creek.  Construction on the slipway commenced around May and the building footings in late December 2006, and we saw our Rescue vessel able to be housed in April 2007.

The facility was completed in late 2007, thanks to the generosity of a developer.

Now we had a place to call HOME.

Under the Service Agreement with the Qld Fire and Emergency Services we are required to maintain training for personnel involved in Search and Rescue operations, and medical evacuations, and to provide safety radio and communication services, public awareness and education.

We have a growing number of members, most of who reside outside the area.  A small but dedicated team fulfil the roles of Executive, Committee, Boat Crew and Radio Operators.

The service is provided by competent and fully accredited and trained personnel, all of whom are volunteers.

It is very rewarding knowing that you have saved someone’s life or assisted in their well-being.

The area serviced by VMR Round Hill is the coastal strip from Pancake Creek to the north, Baffle Creek to the south, offshore to Lady Musgrave Island and the Bunker Group of Islands and reefs, including Fairfax, Hoskyn, Bolt, Llewellyn, and Fitzroy.

This is an area of approximately 1200 square nautical miles of ocean.

We have a good working relationship with our neighbouring VMR Squadron’s, VMR’s Bundaberg to our south, and Gladstone to our north, along with Coast Guard Yeppoon and Keppel Sands.

We come under the Gladstone Water Police District and have contact with other relevant Government agencies when required ie Aust. Border Force, the Qld Boating and Fisheries Patrol, and the Environmental Protection Agency. 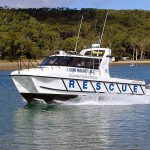 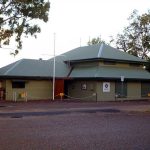 VMR Round Hill Base 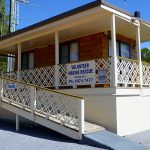 VMR Round Hill Base

Location
Get Directions
Back to Location Map
Go to Top